Without further ado, here's Hz in her Xena costume, beside the photo I used as a model: 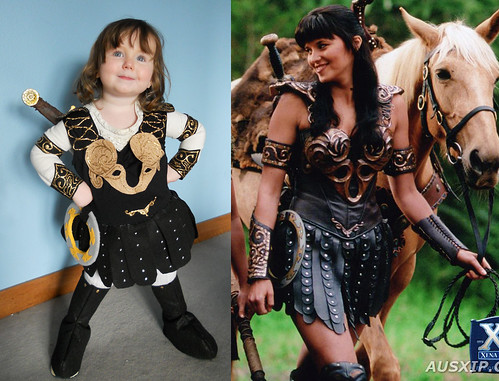 I like how Xena gazes approvingly at Mini-Xena. Anyway, I have a bunch of costume-building photos, but I'm not going to have time to assemble and document all that this weekend. But I did want to at least get one good photo out there, so everyone can admire. Much thanks to

sanguinity for her excellent work on the chakram!

It wasn't until after I poked with a wooden broom handle at the dryer's plug several times that I realized it was the Metaphor for My Weekend.

See, a 220 V outlet has two hot lines and a ground (as opposed to a 110, which has one hot and one ground). An electric dryer uses one line for the motor, one for the heat. The outlet in our house is a little wonky, so sometimes the plug loses connection on the heater side, so the dryer runs and runs, but doesn't get hot. So you can spend a LOT of time tumbling clothes in the dryer, but they remain cold and damp.

When this happens, shifting the plug about in the outlet will often reestablish the connection, and Mr. Dryer gets hot again. It's hard to reach the plug, and I prefer having a bit of non-conductive material between me and the current, so I use the broom handle. My poking was mostly ineffective, so very little of the dryer running time was actually productive.

As you can probably guess, that's how my writing time went this weekend. I had three comic scripts mostly done, but spent the day trying to get them all the way done. And then assemble one for tomorrow. And I made no progress on my novel today. But I did give

lenser feedback on a screenplay, so that's something.

I hope your weekend was more productive, and less metaphorical...
Collapse