Friday was devoted to hiking with Stonecarrier. We left early (well, after I assembled and posted Friday's Comic), and after quick stops at the gas station and the grocery, we were heading south toward Silver Falls State Park. Google Maps said that it was about the same time to drive on I-5 or take the rural highways, so we took 213 toward Silverton. The day was gray, as expected, and we hoped that the forecasts of "Showers" was accurate.

We were the first car in the parking lot by South Falls. The plan was to hike the near-mythical Trail of Ten Falls, which made a 6.9-mile loop along two forks of Silver Creek. 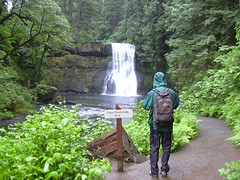 Everything pretty much went to plan. We put on rain gear about twenty minutes in, as the faint drizzle started becoming a more serious drizzle, and we didn't want to get soaked early on. We saw many salamanders on the trail, slowly fleeing as we'd go past. We stopped for lots of pictures (click the photo to see my Flickr set), especially to show that we saw all ten waterfalls. I don't think we saw anyone else for the first hour, which made it easy to imagine we were the first humans ever to discover the stairs, well-maintained trails and trail-side benches along the creek.

The forecast was accurate if we counted it as one long rainshower that lasted with varying intensity until the afternoon. But that's what happens when one hikes in Oregon this early in the season.

By the time we were back to the car, we were tuckered out. Stonecarrier napped much of the drive home. I was groggy for the rest of the day, despite a nap, and then beset by a headache. So our hike was pretty much the major accomplishment of the day. I'm glad we went, though. It gave us the chance to hang out together, and we don't get to do that much. And it was a beautiful hike, if you like the foggy, drizzly and incredibly lush scenery of Oregon forests.
Collapse